Find out about the life and career of eccentric performer Iman Lizarazu.

Iman Lizarazu was born in a small village in the Basque region of France, where her family has lived for over 800 years.

Iman spent her early years in both the Basque Country in southwestern France and in Moscow. She first performed on stage at age six, playing the Mouse in “The Nutcracker.” The piece would serve as her launchpad into the world of classical ballet and give her a strong foundation in this discipline and choreography. Those years found Iman most often at the Moscow Circus training gym, learning circus arts from a bygone era.

Later in her teenage years in Dresden, Germany, Iman studied at the Circus School and continued honing her juggling skills. Iman tested into Dresden University of Technology without attending a formal high school as is normally required. Initially declaring a major in medical engineering, she soon realized that she got squeamish at the sight of blood and switched her major to the bloodless fields of math and physics. After two years, she went to Moscow and studied at the Lomonosov Moscow State University – the highest-ranked university in Russia. Iman went on to earn a PhD cum laude in astrophysics from the Max Plank Institute in Munich in 1995. Upon her graduation, the faculty praisingly commented that “the fresh breeze had left the institute when Iman completed her PhD.”

Iman has been active in Clowns Without Borders since its inception in 1993, when she volunteered in refugee camps in Kosovo, Bosnia. In 1993 she also went to St. Petersburg, Russia and the country of Georgia to teach and to perform in orphanages. Her other Clowns Without Borders work includes performing and teaching in Cuba periodically from 1997 to 1999. She also taught and helped to establish the first circus school in eastern Africa in Nairobi, Kenya. This project was run as part of a program called “Kuruka Maisha,” which in 2013 won the National Arts and Humanities Youth Program Award given at the White House by Michelle Obama. She also worked with Doctors Without Borders in hospitals in Somalia in 2009. She gave performances and classes in Haiti in 2010, and also performed in California state prisons in 2012.

Iman is co-owner and co-creator of Renegade Juggling, one of the world’s leading suppliers of juggling equipment.

Although a person of many languages, Iman is silent when she does her mime art. She is passionate about clowning, and spends a considerable amount of time and energy exploring and honing her craft. She has performed in Tandy Beal and Company’s “Mixed Nutz! The Nutcracker REMixed” to glowing reviews. Wallace Baine of the Santa Cruz Sentinel says: “Weaving through the architecture of ‘The Nutcracker’ story is a collection of amazing performers including Iman Lizarazu, the multi-talented juggler/clown who serves as the show's ‘narrator’ though she has no lines.”

Iman studied at the School of Mime with Marcel Marceau, and with masters Julie Goell and Avner the Eccentric. This background helped her blend her training with her rich cultural background, and the product is a riveting, inspiring show.

After four decades of training her body to move with the grace and expression that miming requires, Iman has created an engaging 90-minute solo show entitled “Basquette Case.” This entertaining portrayal of a character suffering from insomnia takes us through one sleepless night in a series of mesmerizing and gravity-defying vignettes. Iman’s intelligence, passion, and deep range of techniques come together to create an amazing, tender and profoundly insightful clown character.

Iman was born in a small village in the Basque region of France, where her family lived for centuries. She is widely traveled and speaks multiple languages. 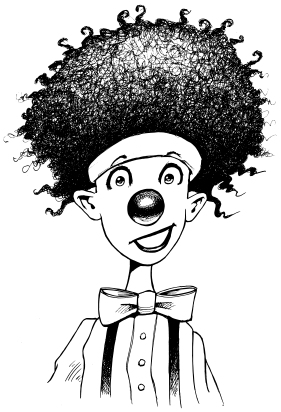 Read Reviews from real people who have watched Iman perform

Reviews
Back to Top