Discover the Performances and Teaching of Iman Lizarazu

Learn More About the Shows You Can Watch

Starring Iman Lizarazu, "Basquette Case" is a story about a clown struggling with insomnia and desperately trying to fall asleep! In a hilarious take on a condition that has affected us all at some point, Iman takes mime to new heights as she cooks up side-splitting strategies to hopefully get some blessed sleep. The result is a rollicking whirlwind of bed-time antics that include juggling pillow feathers, a Flamenco ballet while juggling seven rings, a pirate's adventure atop a balance board, and even a tango that brings her clothes hanger Max to life!

Iman is a world master and teacher of Eccentric Performing, Circus Arts, and Commedia dell'Arte. Bring Iman to your community, and let her enrich the lives of your audiences forever!

This show is about a clown sitting at home, who begins to knit a little sweater for her puppet. Unfortunately, a run-away ball of yarn turns the clown's world upside-down and now it's up to her to desperately retrieve the yarn. Iman spins a wild story that includes all-white props, juggling, magic and object manipulation to show that whatever we may have planned to knit in our lives does not necessarily turn out the way we expected. Could it be that our lives are not about tying up loose ends but rather letting things unravel? Iman shows us that a rolling ball of yarn can become a journey to finding love, joy and playfulness?

In an interview, Iman tells us about how this show came about:
"For many years I studied with Julie Goell and Avner Eisenberg. Julie was Avner's wife and both taught at the CelebraEon Barn, which is a school for performing arts located in South Paris, Maine. This is where I created my 90-minute solo show "Basquette Case." Julie and I wrote this show together with both Avner and Julie direcEng it. A few years, later Julie fell ill with mulEple system atrophy (MSA). At the end of her life, I spent Eme at my teachers' house. Julie had moments when she was awake and longer Emes when she was asleep, during which I asked Avner to teach me how to knit. The idea for this show began to percolate over the past several years and I realized that I wanted to bring it to life. It's my attempt to create a memory and pay homage to a dear friend and teacher, and to show how we are all connected by the one piece of yarn – namely, the story of our lives."

For her Variété performances, Iman uses vignettes, an eclectic mix of skits as well as material drawn from her "Basquette Case" and "Blanc sur Blanc" shows. These one-off performances are tailored to the needs and time of the venue.

Iman can also create entirely new material depending on what the producers' vision or needs.

Promoters: Please contact Iman directly requesting a link of the full version of the show.

Calendar and Schedule of Events

The Seattle Moisture Festival is the world's largest Comedy/Varieté festival, running for four weeks every spring in Seattle. Presented as a variety show, each act or artist performs their routine within a 3-15 minute time slot while being accompanied by a live show band. 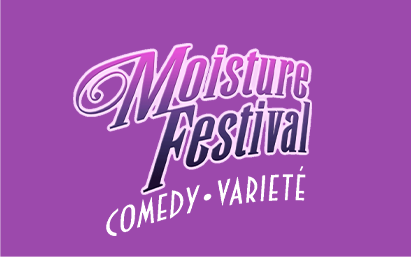 The Festival. How many theatres in the German speaking area specialize in clowning? Just one! The THEATER OLÉ in the Vienna’s third district. That´s why we call it, tongue in cheek, VIENNA’S FIRST- BEST CLOWN THEATRE.